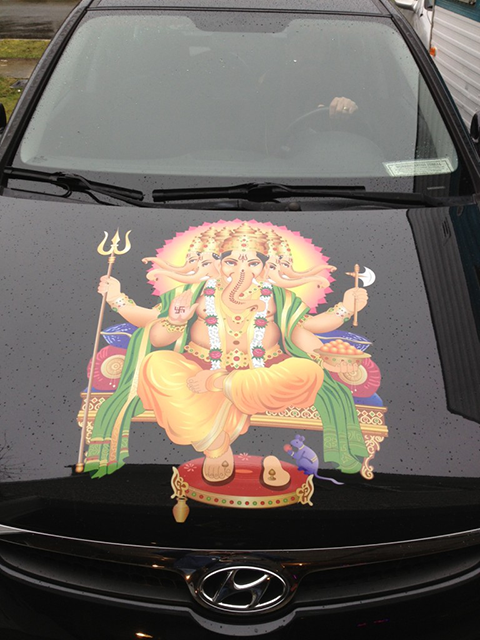 For a long time, I was inspired to create an art-car with Sanskrit writing all over it. In 1999, I took part in a performance in which there was another person, Don Ehlen, who drove an art car. During rehearsals, I asked Don about how he made his car. Unfortunately, at the time, I couldn’t get it together, didn’t have all of the proper materials (mainly paint and brushes), and was involved in so many other things that it never happened, as much as I would have liked it to. Years, and cars, came and went, but I still maintained almost an obsession with creating my art-car. I purchased a vanity license plate that said GANESHA, that rode around on at least 2 different cars, and finally ended up on a white 1996 Mazda Protegé which I got when my Subaru Legacy lost its second gear. I had owned the Protegé for about a year, and, being white already, it made a very tempting canvas. After some research, I decided to put Sri Ganapati Sahasranamavalih on my car for a variety of reasons: Apart from the fact that I am Hindu, and Ganesha is the second most widely worshipped deity in the world (right behind Jesus), I figured it would be good to invoke The Remover of Obstacles when I was on the road, especially since I am recovering from a brain injury which occurred in 2003.

That was 10 years ago, and Ganesha the Car v.1 went to the great junkyard in the sky a long time ago, as has Ganesha the Car versions 2 and 3, and this is now the page for Ganesha the Car v.4, which is a black 2009 Hyundai Elantra Touring. The artwork is still in the process, but it currently consists of Panchamukhi (Five-Faced) Ganesha on the hood of the car. I spent approximately two weeks on the artwork.

Ganesha is the elephant-faced Hindu God of Removing Obstacles, Art, Music, Science, Wisdom, Knowledge, and, basically, everything else. Ganesha is frequently portrayed in the company of the female personifications of, and worshipped for सिद्धि – siddhi, or “success in undertakings”, and बुद्धि – buddhi, or “intelligence”, and he is often depicted with the words शुभ लाभ – shubh labh, or “good luck” and the swastika, a symbol of good luck, and of Ganesha, himself. He is worshipped before any venture is started, being the Remover of Obstacles. He is also the God of education, knowledge and wisdom, literature, and the fine arts.

The Yantra is a sacred symbol to Hindus, which is basically a 2-dimentional abstract representation of a Deity. “Yantra” literally means “Loom” or “Instrument” or even “Machine” In actual practice a Yantra is a symbolic representation of aspects of divinity. It is an interlocking matrix of geometric figures, typically circles, triangles and floral patterns that form fractal patterns of great elegance and beauty. Though drawn in two dimensions a Yantra is supposed to represent a three dimensional object. Three-dimensional Yantras are now becoming increasingly common.

It is extremely disappointing to me that I have to include this section, but I do, so here it is: In the west, particularly in North America, it is terribly unfortunate that, during the past 80 to 100 years, the Swastika has also come to be associated with a symbol of the German national socialist party, also called “nazis”. In German the swastika is called “hakenkreuz” and it is illegal to display a “hakenkreuz” in a nazi setting in Germany… however, it is not illegal, in Germany, to display a swastika in a Hindu setting, or in a Buddhist setting, or in a Jaina setting. Even in Germany they recognise that a symbol cannot be guilty for the acts of a madman! This website has no connections to any racist propaganda. I do not deny the pain and anguish of the Second World War and the Holocaust. I feel that the time is ripe to put the nazi decade into the proper context in full view of the ten thousand years of suppressed Swastika history and to let the Swastika get on with its benign life. I invite Jews, and all others affected by the war, to look at the evidence for the existence of a sacred Swastika in the world. While it is unfortunate that such a positive symbol would come to represent what to most people is a synonym for the ultimate evil, that doesn’t change the ancient, sacred nature of the symbol in any way. The fact that the Swastika is part of the artwork on Ganesha The Car does not indicate that I am a supporter of the cause of nazis or “white-supremacists”, in any way, in fact, it is quite the opposite. If you are offended by the swastika in any form, try thinking of it this way: I am actually getting back at the nazis for all of their atrocities by using a symbol that represents them in the opposite way, as an image of peace.

Millions of people of Indian origin live in the west, including over 2 million Indian-Americans in the United States. Jain, Hindu, Buddhist and other religions, festivals, marriages and ceremonies continue to use the Swastika as their main religious and cultural symbol, regardless of the ignorant people who think that “Swastika equals nazi”. It doesn’t. They’re wrong.

And by the way, to a Hindu, it doesn’t matter if it is rotating to the right — 卍 — or to the left — 卐 — either way, it’s a symbol that represents Sri Ganesha, The Lord of Removing Obstacles.

Are we to rely on a relatively small, wrong-thinking, under-educated mob, less than 100 years ago to determine the ultimate meaning of the symbol, or should we, instead, rely on, literally, thousands of years of tradition which spans, literally, every culture, and every group of people on earth to tell us what the symbol means? To me it is obvious.

For more information, see 卐 – FRIENDLY SWASTIKA – 卍, 卐 – SWASTIKA! – 卍, “Hitler cross” or Swastika – The true origin and relevance, Western use of the Swastika in the early 20th century, Reclaiming The Symbol (by Jewish artist Edith Altman), ManWoman’s Save The Swastika, Swastika Symbol – Its Significance, Meaning, The Legend Of The Swastika, The Twist of Fate, The Auspicious Swastika, Swastikam – Symbol of Auspiciousness, The Fleur-de-lis and the Swastika, and many other sites throughout the web. Specific questions can be answered by using the feedback form.